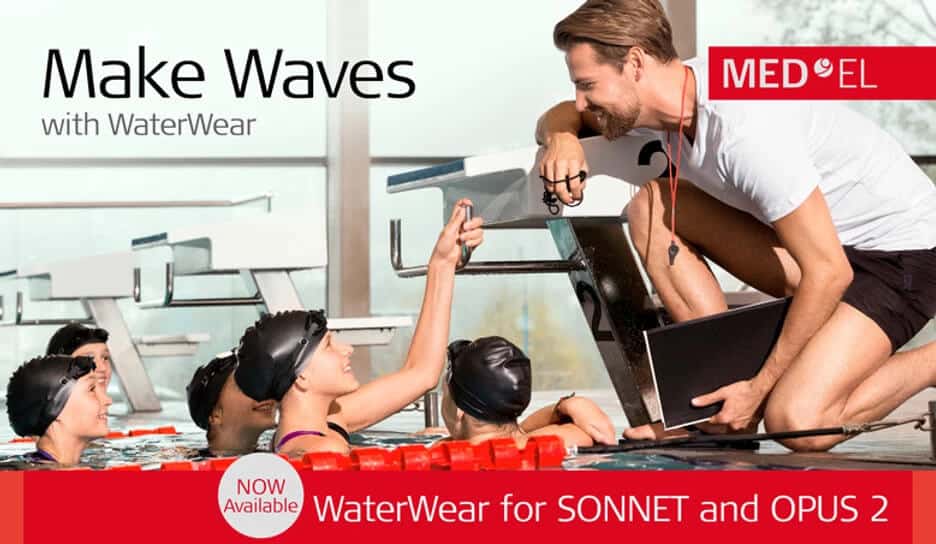 After watching the Olympics summer games, many can agree that swimming is a fun and exciting pastime that America loves. That is one reason why water-ready cochlear implant styles have been a major development within the past few years.

Both the Advanced Bionics and Cochlear Americas devices have water-ready options for their traditional behind-the-ear cochlear implants. Now, Med-EL has joined the fun!

WaterWear packs include three covers, each of which can:

What is WaterWear? WaterWear is a fully waterproof accessory designed specifically for the MED-EL SONNET, OPUS 2, and RONDO audio processors. It provides complete protection from freshwater, saltwater, and chlorinated pools, as well as common cosmetics, soap, and sunscreen.

How waterproof is WaterWear? With an IP68* rating, WaterWear is completely waterproof and dustproof.

What kind of batteries should be used with WaterWear? Use only rechargeable, alkaline, or silver-oxide batteries recommended by MED-EL instead of zinc-air batteries. Zinc-air batteries require air for activation, and because WaterWear provides a complete seal around the audio processor, air cannot enter.

How many times can WaterWear be used?  Each WaterWear cover may be used up to three times. The adhesive strips used to seal WaterWear are single-use only.

Where can WaterWear be used? WaterWear may be used anywhere there’s water – in the shower, in the bath, in the pool, at the lake, or by the ocean.

How can I make sure that the processor will stay in place while using WaterWear for swimming? There is a tab with a small hole on the WaterWear cover that can be used to secure it with a special clothing clip. For additional security, the processor and WaterWear can also be placed under a swim cap or Sports Headband (designed for RONDO users).

Will WaterWear affect hearing quality? The sleek and form-fitting WaterWear is designed for optimal microphone performance in or near water.