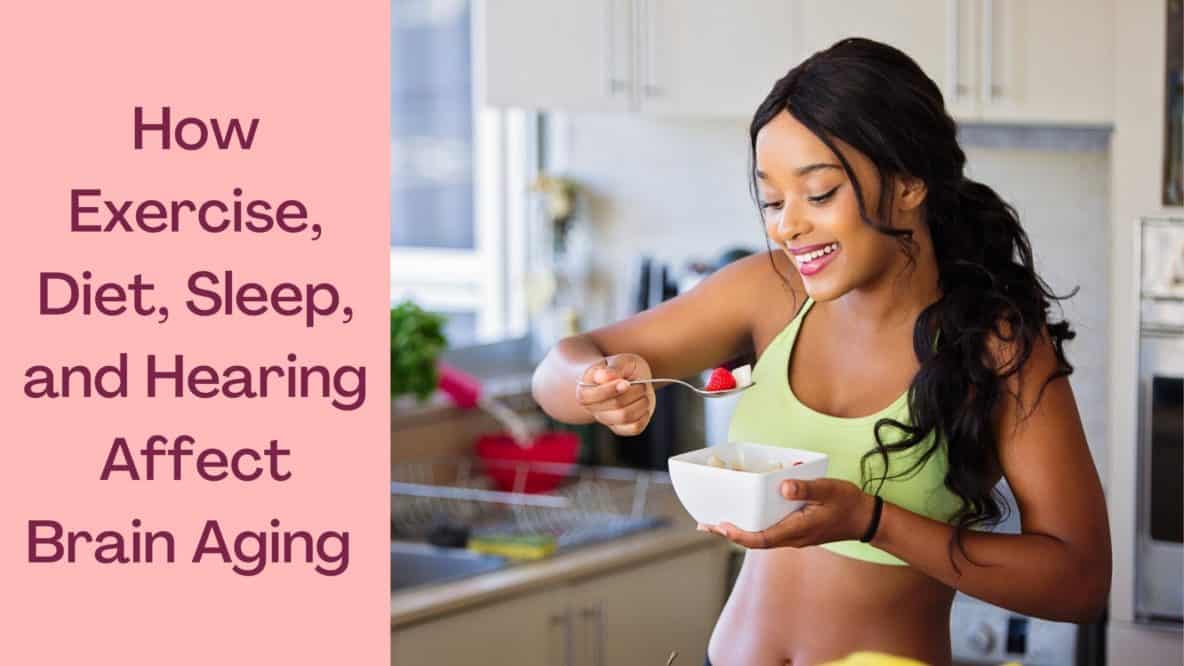 We often talk in audiology about how hearing ability (whether it be natural or aided by hearing aids) is important to our overall good health and well-being. More and more, this is being understood across the medical disciplines as links are found between various activities, hearing ability, physical health and brain health.

It seems at present that four main factors can be identified in contributing to good brain health as we age, and they are exercise, diet, sleep habits, and hearing ability.

Aging and the Brain

As we age, our brains normally slow down. We don’t lose intelligence, but our flexibility wanes. It takes us longer to process, and our motor, sensory and cognitive abilities typically decline. This seems to be due to shrinkage of white matter tissue in the brain, possibly the result of demyelination.

Myelin is a fatty tissue that surrounds our neurons and nerves, helping to contain neurotransmitters as they travel. They’re kind of like the shielding on a wire. Without the myelin sheath around our neurons, they become less efficient and tend to “leak” neurotransmitters, making the signaling process slower.

The good news is that there are some things we can do to help prevent the excessive effects of aging in our brains.

A study involving 1740 participants aged 65+ found that those who exercised 3 or more times per week had a 32% reduction in their risk for dementia. The study was conducted over 6.2 years. The exercise could include taking a walk or working in a garden; it doesn’t have to be strenuous to see these benefits.

The benefits of exercise are wider-reaching than simply decreasing the risk for dementia. Even among those older adults without dementia who exercise, versus those who do not, research suggests an improvement in episodic memory, processing speed, executive function and attention. Whether it’s a short burst of moderate-intense exercise or a longer-term bout of mild exercise, researchers were able to see actual improvement in cognitive ability, after exercise, in older adults.

While an adjunct professor of psychiatry at the University of California San Diego, Stephen M. Stahl, MD, PhD studied the effects of two diets on aging: Dietary Approaches to Stop Hypertension (DASH) and the Mediterranean Diet (MediDiet). Both diets are considered “anti-inflammatory,” and focus on fruits, vegetables, legumes, nuts, and avoiding red and processed meats.

A new study, which followed about 8,000 people in Britain over 25 years, has found a link between sleep deprivation and dementia. The study began when participants were 50 years old. Over the course of the 25-year study, those who consistently slept six or fewer hours on regular weeknights were about 30% more likely to develop dementia by the end of the study than those who consistently got 7+ hours of sleep.

This study is perhaps the first to strongly indicate that it is insomnia or restless sleep that can cause dementia, rather than the other way around. Since participants were getting less sleep far in advance of the onset of their dementia, it does seem to indicate that sleep is a risk factor.

Sleep disorders such as insomnia or sleep breathing disorders like sleep apnea should be addressed to better promote long-term brain health.

While hearing loss, left alone, increases the risk of dementia proportionately to the hearing loss (by a multiple of five for severe hearing loss), hearing aids can lead to cortical restructuring and cognitive improvement. On average, Americans wait about seven years from the time they notice hearing loss to when they seek hearing aids, but more regular hearing tests and adoption of hearing aids at the earliest recommendation could help prevent negative outcomes in the first place.

If you or a loved one is having issues with hearing, make an appointment with the Hearing Health Center of Houston today for a hearing test and find out what hearing aids can do to improve your life, and your health!