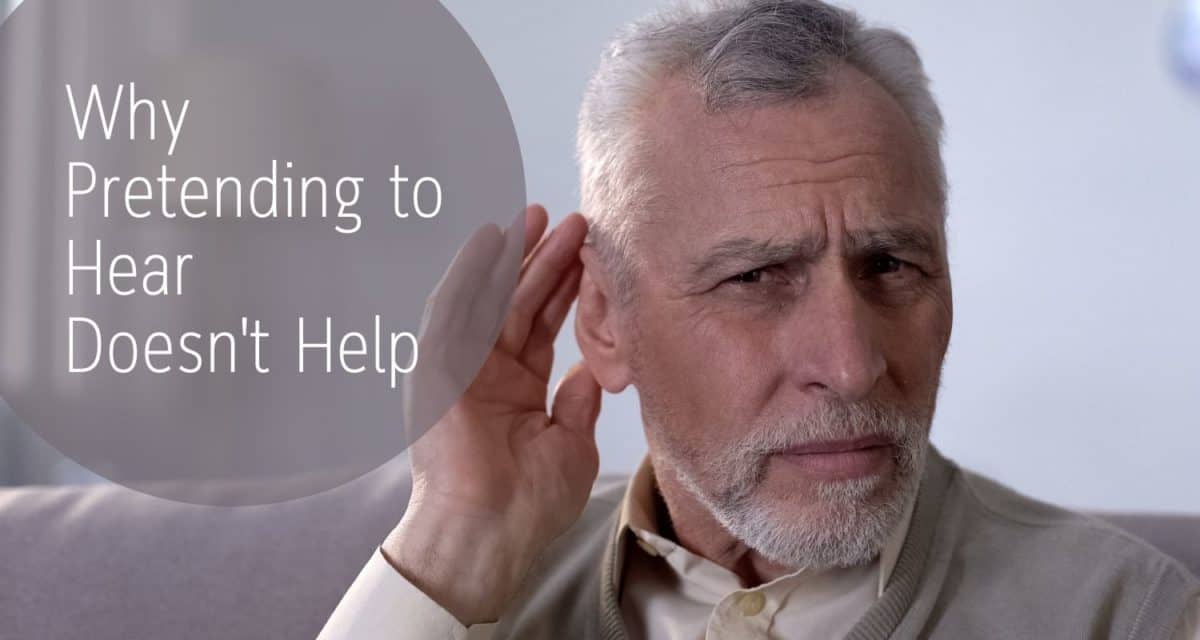 Pretending to hear is not a social phenomenon exclusive to those with hearing loss. Normal-hearing people do it, too! When we’re out in a group, it may seem impolite to interrupt someone’s train of thought while they’re in the middle of a story or a joke, and we often imagine we’ll get a clue from context, or it just won’t matter that we didn’t hear something.

The fear is that if we interrupt too much, the other person will become frustrated and won’t want to talk to us anymore. Repeating the same thing over and over does get tedious, so maybe it’s better to just let the conversation roll than to insist on hearing everything? Wrong!

Pretending to Hear Is Not as Polite as it Seems

When we pretend to hear, we run the risk of letting the other person think we’re just not that interested in what they might have had to say, if we could have heard it. It makes it seem as though what they’re saying doesn’t matter to us.

Now, if we’re in a big group in a crowded restaurant and someone at the other end of the table has the floor, it may be okay to let it slide, or ask the person next to us to give us a quick synopsis of what they were saying. It may be unrealistic to insist that we must always hear everything that is said around us, or to move closer to a speaker while plates of food are on the table. Some situations we must accept.

But a one-on-one conversation, regardless of the background, is not the place to let hearing loss derail the interaction. Pretending to hear is essentially a bad habit. That means that we do it automatically, even when we know it’s not the right thing to do. We can break bad habits!

Turn a Bad Habit into a Good One

The best way to break a bad habit is to turn it into a good one! Once we identify that we’re at the beginning of our routine of pretending to hear, we can morph it into a more constructive way of relating.

Prepare a script that you can adhere to when you want to avoid pretending to hear. The second you notice yourself letting conversation pass you by, you can deploy your script. Soon, you’ll do this as automatically as you once pretended to hear.

Think of the times when you pretend to hear. Maybe in a restaurant or bar, when background sound is an issue? Maybe at a regular work meeting? For any recurring situation, create a specific script that will help you alter the situation so that you can hear.

Here’s an example of how this could work: “(1) I have hearing loss, and (2) this background noise is making it hard for me to hear you. (3) Can you speak a little louder, and face me directly while you talk?”

Another example, say for the work meeting, could go like this: “(1) My hearing loss (2) is making it hard to hear Molly right now. (3) Tom, would you mind switching seats with me so I can be closer to the lectern? I don’t want to miss what you’re saying, Molly, and I know I’ll hear better if I’m more up front.”

If you’re having hearing issues and you’re not yet wearing hearing aids, consider making an appointment for a hearing test. While having a script will help you avoid pretending to hear, hearing aids will go a long way toward making sure you can hear! Some hearing aids on the market today even boast of offering “better-than-normal” hearing in especially challenging listening environments.